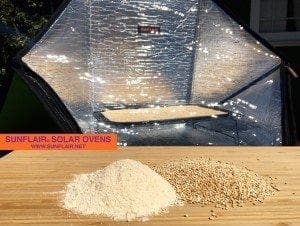 by Bill Bloom
Category Bread/Grains Recipes
Quinoa flour is gluten free, low carbohydrate, nutritious, with a slightly nutty flavor, and is a substitute for recipes calling for wheat flour. It’s a bit pricey, so I make my own.
Most available quinoa and other grains in stores theses days has had the saponins removed, so all that is left is roasting and milling. Look for a package that states pre-washing is not required. Another convenience about quinoa is gums such as xanthan gum or guar gum don’t need to be added for baked goodies.
Some 3000 to 4000 years ago, quinoa was domesticated high in the Andean mountains. The Incas believed it to be sacred. However, the Spanish conquistadors made the indigenous people grow less nutritious wheat. But the secret is out and gaining in popularity. It is now being grown in the United States, Europe, etc. Saponins are chemicals that coat the outside of seeds and grains to deter instincts and birds. They appear as foam when washing. In the old days, the foam was used as a soap.

Additional tools: Coffee/spice grinder to mill the roasted quinoa into flour. I’ve tried a food processor and a blender and they don’t do the job. It stays coarse and with whole seeds.

This site uses Akismet to reduce spam. Learn how your comment data is processed.