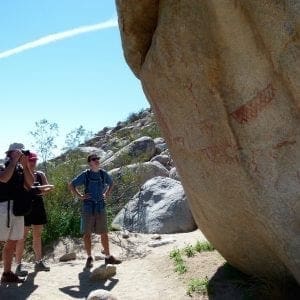 Like then and now, the sun is important for life. It sure would have made the life of earlier people easier if they could have harnessed the sun to cook with. These pictographs are by the Kemeyaay people of Southern California and Northern Mexico (Baja California). Passed down through generations, we know red represents female and black male. Red is made from the oil of roasted wild cucumbers kernels and mixed with red iron oxide. Black was made from roasted wild cucumber seeds and charred on a piece of burning oak bark, and then mixed with charcoal or manganese oxide. Yellow is made from yellow ochre which is a hydrated iron hydroxide (limonite) also called gold ochre. White is made from white ash or gypsum. Hard to make out, but there is still some yellow pigment.

This site uses Akismet to reduce spam. Learn how your comment data is processed.